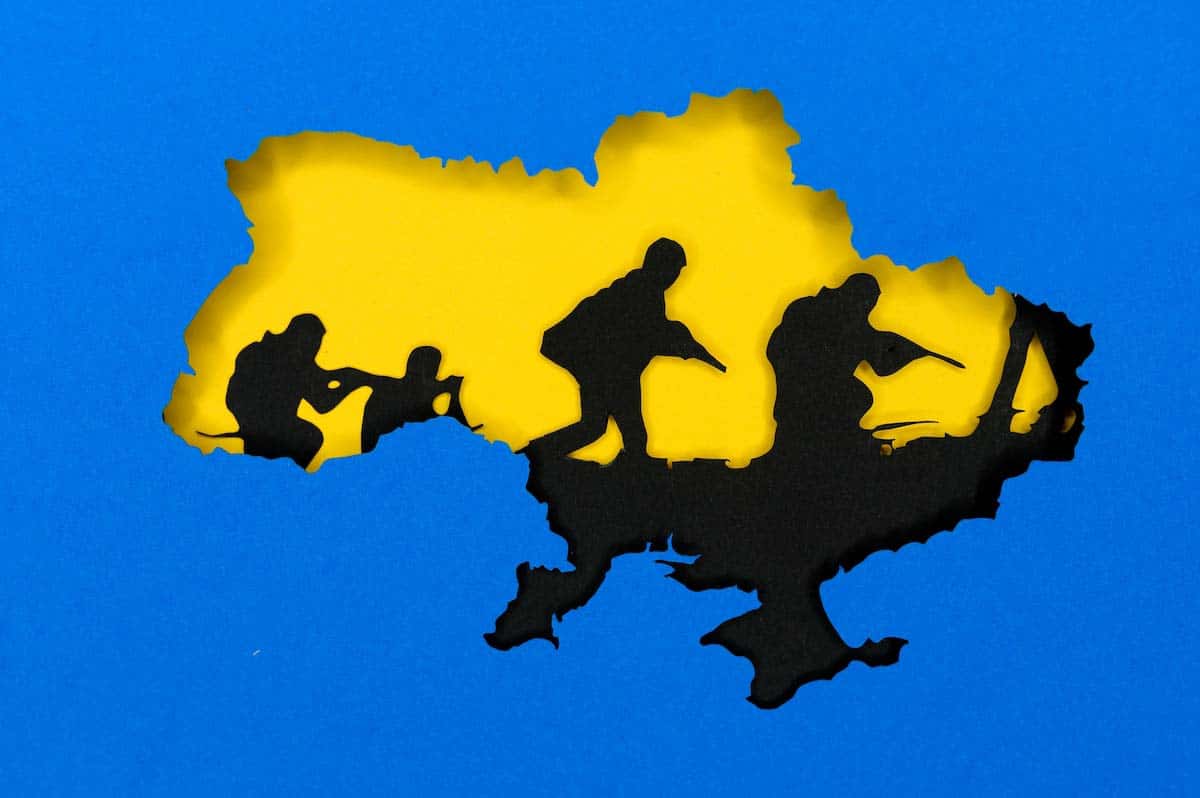 As a follow-up to Dr Christian Marxsen‘s (Max Planck Research Group Leader) interview for the Max Planck  Society, we collected your preferences via social media for questions on international law and the war in Ukraine and put them to him. The answers appear below in descending order, with the most frequently requested question first:

One often hears that Russia felt threatened by NATO and EU eastern expansion. The argument goes that if Russia had agreed a defence pact with a state near the US border, the US would not hesitate to act militarily. To what extent can ‘threatening expansion’ be a legal justification for military action?

From the standpoint of international law, this is not a valid justification. The general prohibition of the use of force between states enshrined in the UN Charter only allows for three constellations in which force may lawfully be used: self-defence, an authorization by the UN Security Council under Chapter VII of the UN Charter, and the consent by the territorial state. Putin has argued that Russia was defending itself against an enlargement of NATO. Although not stating so explicitly, he has employed the language of self-defence in this context. Self-defence is, however, only possible against armed attacks, not against threats. Moreover, no plausible argument has been presented at any time that NATO was in fact planning to attack Russia. The perceived danger of the expansion of an alliance, such as NATO, can never be a legal justification for the use of force. Therefore, the legal situation is clear: Russia is an aggressor and violating the foundational norm of international law.

If we take a wider look, interventions by great powers in their ‘spheres of influence’ have occurred quite often in history, also after World War II. The US, for example, has a long history of such interventions. These interventions were often politically justified with presidential doctrines. Particularly relevant is the Monroe doctrine, named after US president James Monroe who proclaimed in 1823 that the US would not tolerate the establishment of colonies by European states in the Western hemisphere. In the 1960s, this doctrine was updated and the US proclaimed the right to intervene in order to prevent the establishment of communist governments in the Western hemisphere. However, US interventions in Latin America in accordance with this doctrine clearly violated international law. They could not be justified under the above-mentioned legal exceptions. On the other side of the iron curtain also the Soviet Union unlawfully intervened in formally independent states who had distanced themselves from the Soviet course. The Soviet claim was that such interventions were necessary to defend the socialist system against a takeover by capitalism, for example in Hungary 1956, and in Czechoslovakia in 1968.

Such a ‘sphere of influence’ approach is clearly unlawful and it should be emphasized that the current Russian aggression is in no way relativized in view of previous violations of international law by, for example, the US. It is, however, also true that international law has been weakened by such previous illegal actions. There were no legal consequences for the intervention by the US and its allies in Iraq in 2003, which also constituted an aggression not justifiable by any existing legal standard. The selective invocation and enforcement of international law is indeed a problem and a significant danger to international law as a universal normative standard.

Given one of Russia’s aims is regime change in Ukraine, to what extent can regime change be a justification in international law for unilateral military intervention?

The aim to oust the government can never be a self-standing justification for the unilateral use of force. Such attempts violate various norms of international law, most importantly, the prohibition of force and intervention, but also the right to self-determination of peoples. Most importantly, and as already mentioned, there are only three established justifications for the use of force, and, obviously, regime change is not among them. There have been situations in the past where it was discussed whether ousting a government could be covered by existing legal justifications. For example, when Iraq under the rule of Saddam Hussein invaded Kuwait in 1990, there were calls to remove Saddam Hussein from government, particularly in the US. However, the UN Security Council had authorized force only for the purpose of enforcing Iraq’s international obligations and had not authorized his removal from office. In view of such limited authorization, the US refrained from initiating a regime change. It also seems highly unlikely to me that regime change could ever be justified as self-defence. Measures taken in self-defence must be necessary and proportionate to end an attack, and such proportionality is lacking when instead of defending against an attack, the entire government would be removed from power.

Even though international law has progressed significantly in the last decades, it still remains institutionally underdeveloped. Courts only have jurisdiction where states have consented to it; perpetrators can only be tried when states cooperate and, for example, extradite individuals so that they can be put on trial. Under the current circumstances it in fact seems unlikely that the Russian president will be put on trial. It is not impossible though. The International Criminal Court has jurisdiction for war crimes committed during the Russian invasion of Ukraine. It is not impossible that political circumstances could change and that a trial could be held at a later point against Russian officials. Collecting evidence today is a crucial first step in that direction.

When it comes to the question of how a more desirable international legal order should look like, we could think about this in two ways. One could assume that the system is fundamentally flawed. There are certainly good reasons, for example, to question whether the strong focus on state sovereignty as a core principle of international law is desirable. Nevertheless, it is the existing system and there is currently no realistic alternative to it. I would therefore think it is more fruitful to reflect in concrete terms about how the existing system could be improved. And there is lots of potential here. For example, states could ratify the Rome Statute of the International Criminal Court. The US has not done so because they fear that US citizens might be put on trial and that US military interventions worldwide could become subject of legal scrutiny. It seems to me that states should definitely take that risk, because they should only engage in actions in the first place for which they can make a convincing case for legality.

Similarly, more states could accept the compulsory jurisdiction of the International Court of Justice (ICJ) and even states that have already done so could withdraw reservations they have made. Germany, for example, has excluded from the ICJ’s compulsory jurisdiction disputes connected with the deployment of German armed forces abroad and also disputes connected to the use of its territory for military purposes.

International law could significantly be strengthened if states that advocate the international rule of law subjected their actions to legal scrutiny by international courts. This could create a momentum which other states could also be inclined to follow. Of course, it will not be easy to convince powerful states to take steps in that direction. This will not be possible through international pressure alone, but international issues need to be on the domestic agenda, including pressure from civil society.

It is difficult to predict the likelihood in concrete terms. Much will depend on the investigations that are currently ongoing at the International Criminal Court, but I am quite sure that some perpetrators will be put on trial. Of course, first of all the ICC needs to get hold of them and this will be a difficult exercise as long as Russian authorities are not cooperating. Because of this, it will not be a majority of those responsible for example for war crimes that will be put on trial, but the proceedings as such would be an important signal. The effects will, moreover, be also felt by those perpetrators staying in Russia. They will not be able to travel to the European Union without fear of being arrested.

Looking ahead to when Russia’s war in Ukraine ends, what would be the role of international law in enforcing reparations?

Under international law, Russia is clearly responsible for all damages that occurred as a result of its aggression. Some mechanisms already exist through which reparations could be awarded. Before the International Criminal Court, for example, victims may claim reparations—another reason for the importance of the ICC proceedings. Overall, it will nevertheless be very difficult to enforce reparation claims regarding the vast damages in Ukraine. It would be necessary to set up an international mechanism for this purpose in which Russia would need to participate. For the time being this seems to be only a theoretical possibility.

There have also been calls to use Russian assets—for example of the Russian Central Bank—in order to pay reparations to Ukraine. This, however, is in conflict with Russia’s sovereign immunity. The call to expropriate Russian oligarchs and use their assets to pay reparation to Ukraine is even more problematic as private individuals cannot be held accountable for government decisions.

Unfortunately, international law is ill-equipped to enforce such reparations. Institutions would need to be set up, and currently it seems highly unlikely that Russia would ever agree to any such reparation mechanism.

What consequences does Belarus face under international law for its involvement in the war, for example, letting Russian troops attack from Belarussian soil?