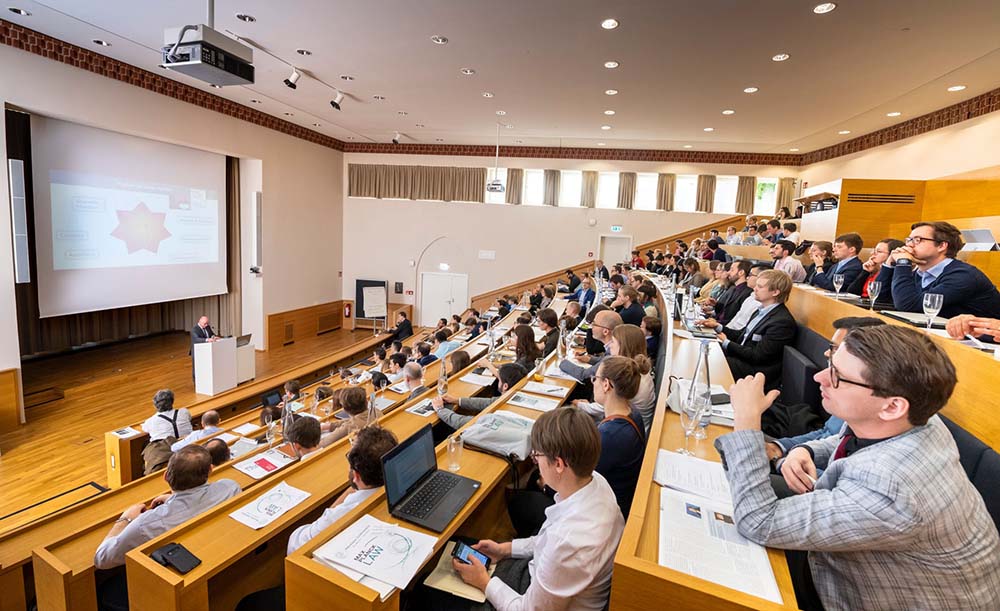 Bringing together Max Planck Law researchers from across Germany and Luxembourg, the conference is an occasion to meet, exchange ideas, and to explore inter and intra-disciplinary legal researach under a common theme.

Solidarity may be defined in the most general way as a factual and/or normative mutual attachment between individuals or groups. A normative use of solidarity can be found in the Roman law of obligations (obligatio in solidum), see eg Bayerts 1999. Its modern form might be traced back to the ninetheenth century, in particular Durkheim’s sociological elaboration of the concept, which later had great influence on the development of French public law, see eg von Bogdandy 2010.

Another related field in which the question of solidarity has been brought into  focus is migration. In recent times Europe has witnessed significant in-migration. This has involved both economic migrants and more than a million refugees fleeing war in Syria in 2015–2016.  Russia’s current invasion of Ukraine has caused a westward wave of refugees in Europe unlike anything seen since WWII. What are the strands and limits of solidarity owed by one people to those—often desperate and despairing—who arrive at their national boundaries? Especially with the war in mind, the notion of solidarity seems central to much of Europe’s security framework.  The expansion to the old East-Bloc countries of the promise of solidarity expressed so categorically by Article 5 of the NATO Treaty has been a strain on European security just as much as it has been a reassurance of peace.  Can solidarity taking the form of those kinds of commitments— blood and treasure—be secured by law?

Another dimension of solidarity has posed a particular challenge to Europeans in recent times.  The very project of an ever-closer Union has exposed the demands and tensions of solidarity amongst the Member States.  This has emerged as financial and debt crises have plagued some countries, which make pleas for economic solidarity increasingly in the form of hoped-for direct budgetary transfers.  But despite the EU’s foundational commitment to solidarity, the situation has brought into stark relief the tension between EU solidarity and individual state interest, with the latter seeming to have the upper hand. To what extent could this lead to a corrosion of EU legitimacy and the rule of law? What are the prospects for legal enforcement of EU and transnational solidarity in general?

Similar questions may be asked of reactions to the COVID-19 pandemic. For example, how did the closure of internal borders in the early stages of the pandemic balance Member State’s margins of appreciation with the principle of proportionality and solidarity? And more broadly, what of solidarity in the context of the uneven global distribution of vaccines?

These are just some of the questions relating to  just some of the legal areas in which solidarity  plays a major part.  Max Planck Law invites researchers from across the Max Planck Law network to submit an abstract on any area of law and solidarity (not limited to the above brief and far from exhaustive conspectus)  to be presented at this year’s annual conference. This is an exciting opportunity for your research to be prominently featured by Max Planck Law.

Presentations shall last approximatley 20 minutes. There are a limited amount of presentation slots and abstracts will be assessed and selected on their merits.